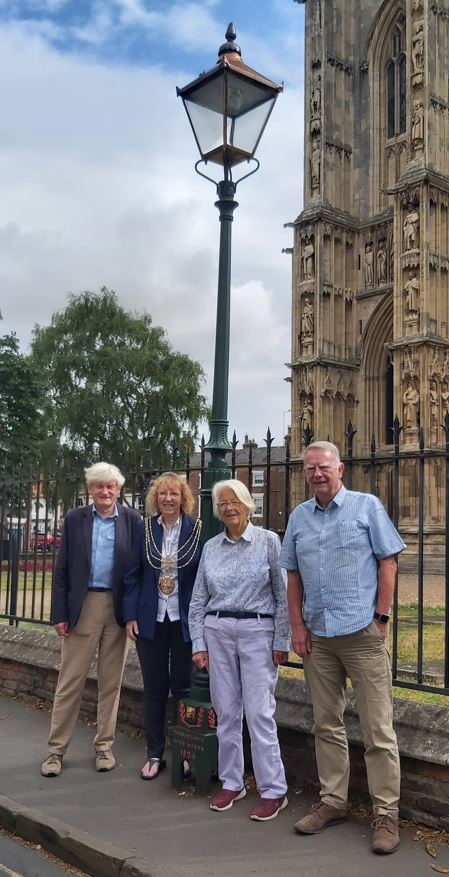 The Brighter Lamps of Beverley

Scattered throughout Beverley are 39 cast iron lampposts, which cast a light on Beverley’s rich industrial past.

Dating from 1824, these are believed to be oldest and largest group of such lamps in the United Kingdom that are still in active use today. Of course, they are no longer powered by gas, but instead electric, and many of their locations have changed over the year, but with all listed as Grade II structures, they are an important part of Beverley’s heritage

The Mayor of Beverley, Councillor Linda Johnson, explained: “Although Town Council owns the cast iron lamps and we knew they are of historic value, we were not aware quite how significant they are until the Civic Society approached us about refurbishing them.  We have a Service Level Agreement with East Riding of Yorkshire Council to provide general maintenance, but this was something different.  Proper restoration required the engagement of the Bell Group of Leeds, which specialises in working with historical items of this kind.  The town is indebted to the Beverley Civic Society for raising this matter and creating a comprehensive catalogue of all the posts, their locations and history.”

The uniqueness of the Beverley lamps is not only their age, but also their inscriptions.  Throughout their research, the Civic Society could find no other such collection which bore such detailed information in their castings, the oldest ones being created by engineer John Malam.

Speaking on behalf of Beverley Civic Society, Dr Mike Farrimond said: “As far as we can discover, only Beverley had lamps that recorded the engineer (I•MALAM), the foundry (THORNCLIFFE IRON•WORKS) and the date (either 1824, 1825 or 1826) cast on the bases. There are still 19 of these Georgian lampposts in use around the old streets of Beverley, converted to electricity after the 2nd World War. We have not found any earlier street lamps in the UK, nor even any others dated. The UK led the world in gas street lighting, and British engineers were employed to light European cities such as Hamburg in 1844, a Malam project run from Hull with Yorkshire hardware.”